H-bond Networks are back! The H-bond Network Objective encourages players to bury satisfied H-bond networks at the interface between symmetric chains. H-bond networks are a great way to introduce polar residues at the interface, but it's important that all of the bondable atoms make hydrogen bonds! In this puzzle, there are no limits on the Complex Core, but we've included the Complex Core objective so players can see which residues count as core in the H-bond Networks. There a few other objectives in effect; see the puzzle comments for details. The Baker Lab will run folding predictions on your solutions for this puzzle, and those that perform well will be synthesized in the lab. Remember, you can use the Upload for Scientists button for up to 5 designs that you want us to look at, even if they are not the best-scoring solutions!

Core Existence: Monomer (max +3000)
Ensures that at least 30 residues are buried in the core of the monomer unit.

Core: Complex (max +0)
Awards no bonuses or penalties. Click Show to see which residues count as "Core" for the H-bond Network objective.

H-bond Network: Rewards networks that comprise at least two H-bonds involving core residues. Networks must be at least 75% satisfied (i.e. 75% of all bondable atoms in a network must make a H-bond).

Ideal Loops (max +500)
Penalizes any loop region that does not match one of the Building Blocks in the Blueprint tool. Use "Auto Structures" to see which regions of your protein count as loops.

I'm seeing what might be a scoring issue with H-bond networks: of 3 identical networks 2 score 500 and one scores 333.

That sure sounds like a bug—we'll take a look!

Another possible issue (or maybe a different manifestation of the same one). Changing a residue not involved in the HNet reduces its score. Scientist shared as "HNet Issue 2"

It looks to me like a bug. That residue probably should be involved in the HBNet.

In this screenshot, the bottom ARG is clearly making a H-bond with a SER in the network, even though the ARG is not counted in the network. If you mutate the ARG, then the SER becomes unsatisfied, reducing the score of the HBNet. 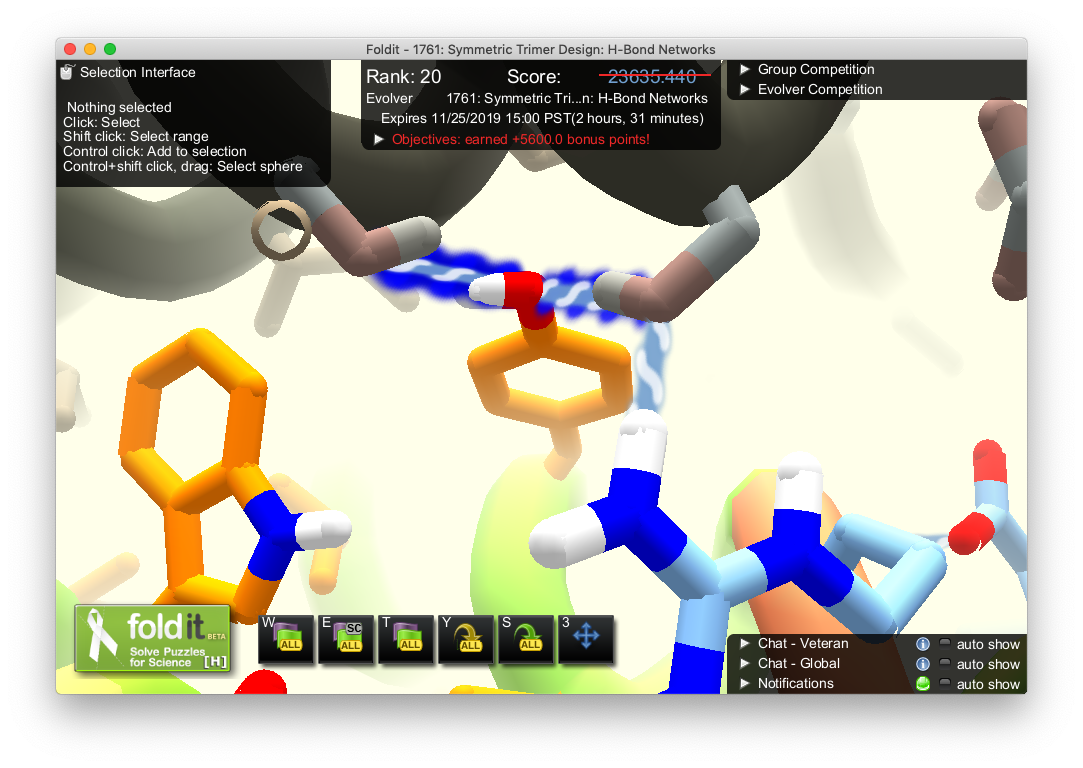 I'm not sure why the ARG is excluded from the network. I can think of a couple places where something might be going wrong, but we'll have to dig a little deeper to figure it out.

This is a quirk in the way that HBNetworks are scored, and something we can adjust in the future. This puzzle gives a bonus for maximum 8 H-bonds, but each of your networks has 3 H-bonds. Because of the 8 bond limit, one of your networks only gets a bonus from 2 of its H-bonds.

The HBNet bonus scales with the number of H-bonds in your network. This means that you can get a bigger bonus by adding H-bonds to your network. But in reality, the size of the network is not as important as its satisfaction (i.e. do all of the polar atoms make H-bonds). We limit the maximum H-bonds to try to prevent excessively large networks.

I realize this info about maximum H-bonds isn't available for players anywhere. We'll make sure to include it on future puzzles!