This is a throwback puzzle to the early days of Foldit. This protein is able to absorb light and use the energy to transfer chloride ions across the cell membrane. We are revisiting old Foldit puzzles so we can see how useful the recent additions to the game have been. 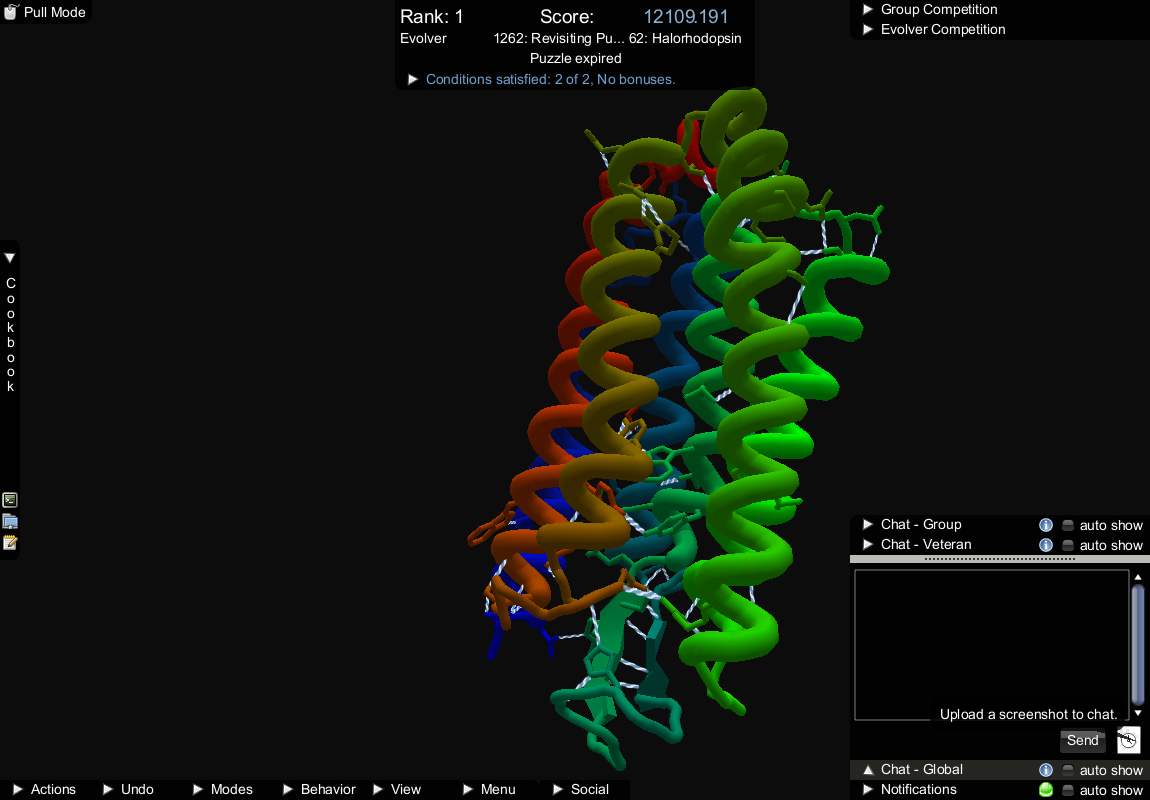 I am running Windows 10 Pro 64-bit and the puzzle crashes on my when frequently when I "wiggle sidechains" or run any script that utilizes that feature.

I have 16GB of RAM with ~20% free when it crashes, so I don't believe memory is an issue. Also, I only run one client at a time.

The crashing on high wiggle power seems to have something to do with undo.

Still early on, but in Undo -> Graph Properties, setting "Memory Usage" to 0% seems to have eliminated the quick crashes I was seeing before on several recipes.

Even without these changes, some recipes seemed invulnerable to the problem. For example, Microidealize 4.0 ran to completion where similar idealize recipes crashed. Microidealize uses quicksave and quickload only, and avoids the recentbest functions.

Other recipes which were adapted for Sketchbook puzzles were also much less crashy. These recipes tend to do a quickload if there's no gain or a small gain.

In Undo -> Graph Properties, I had already set Max Graph Length to 25, which didn't prevent the crashes.

On my old laptop, changing Memory Usage to 0% didn't prevent a crash. I've tried it several times with different settings, and again with a fresh install of Foldit, nothing worked.

Crashes on most anything I use on it at high CI setting. Has crashed both my i7 and i9, both 64bit. crashed not the client alone but the machine on the i9 down for 2 days now. Will not get past the POST. More than ample memory and space on both machines. i7 crashes only client, but instantly. None of the workarounds are having any effect. With respect, this is not a level playing field. The puzzle should be withdrawn please.